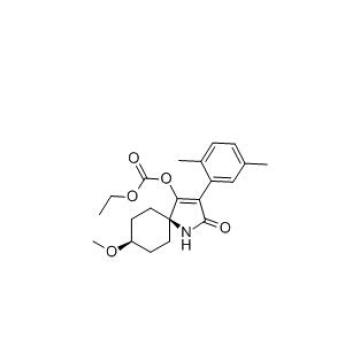 Spirotetramat cas number is 203313-25-1 which is a new special insecticidal and acaricidal agent that can be moved up and down throughout the plant after application. This unique systemic property protects the new stems, leaves and roots and prevents the eggs of the pests and the larva grows. The mechanism of action is to cause larval death by interfering with insect fat biosynthesis and reduce adult reproductive capacity. Due to its unique mechanism, it can effectively control pests that are resistant to existing insecticides. Spirotetramat cas 203313-25-1 is a representative molecule in spiro-type insecticide molecules. It is a quaternary acid-based insecticidal snail developed by Bayer. The dosage form is mainly a suspending agent of 240 g/L. Mainly used for cotton, vegetables and ornamental plants to control whiteflies and leafhoppers. The special property of spirotetramat is that it is effective against eggs and adults of whitefly and worms, especially for room temperature whitefly and cotton red spider. It can be used for cotton, vegetables and ornamental plants at a dosage of 100-150g/hm2, which can maintain a long period of validity; it also shows good application prospects in crops such as strawberry, apple and other crops. It is worth noting that it is particularly effective against whitefly nymphs and nymphs, and it also has a very high lethal effect on whitefly eggs. He can also reduce the hatching rate of eggs, in addition to the high control effect on adults, it can also reduce the rate of egg production. If the spirotetramat is combined with imidacloprid, it can make up for the shortcomings of early prevention and control. In application, spirotetramat is indeed a very "tolerant" variety, and the new structure introduces new properties.
The synthesis method of spirotetramat is as follows:
1. Hydrogen reduction of p-aminoanisole to obtain 1-amino-4-methoxycyclohexane as the first step product;
2. The first step product obtained above is cyclically reacted with formamide and carbon monoxide under the action of a catalyst to obtain a second step product cis-8-methoxy-1,3-diazaspiro[4,5]-fluorene. -2,4-dione;
3. The second step product obtained above is hydrolyzed under basic conditions to obtain the third step product cis-4-methoxy-1-aminocyclohexylcarboxylic acid;
4. The esterification reaction of the third step product obtained above with methanol to obtain the fourth step product cis-4-methoxy-1-aminocyclohexylcarboxylic acid methyl ester;
5. Substituting the fourth step product obtained above with 2,5-dimethylphenylacetyl chloride under the action of sodium bicarbonate and basic zeolite molecular sieve catalyst to obtain the fifth step product cis-3-(2,5-di Methylphenyl)-8-methoxy-2-oxo-1-azaspiro[4,5]non-3-en-4-ol;
6. The product of the fifth step obtained above is reacted with ethyl chloroformate to obtain a compound spirotetraacetate.
Spirotetramat is the larval death caused by interfering with insect fat biosynthesis and reduces the reproductive capacity of adults. The mechanism of action of deltamethrin is to delay the shutdown of sodium (Na) gate, resulting in increased sodium (Na+) influx and prolonged time. The potassium ion (K+) efflux time is delayed, resulting in prolonged post-potential potential, depolarization of the axon membrane, and the spirotetramat has good persistence, but the quick-acting effect is poor, and deltamethrin has a quick hit. Inverted. Therefore, the combination of spirotetramat and deltamethrin has good quick-acting effect and long-lasting effect,which can effectively exert the advantages of a single dose, make up for the deficiency of a single dose, reduce the dosage of a single dose, and improve the use of the medicament. Safety, delaying the emergence and development of pest resistance, It meets the development requirement of reducing pesticide application and increasing pesticide efficiency

The new insecticides SPIROTETRAMAT CAS NUMBER 203313-25-1,is quaternary acid compounds, and are similar to spirodiclofen and spiromesifen. SPIROTETRAMAT CAS NUMBER 203313-25-1 has a unique role is one of the modern insecticide with two-way internal absorption.The compound can move up and down throughout the plant, reaching the foliage and bark, so as to control pests on the inner leaves of lettuce and cabbage, and on the bark of the fruit. This unique inhalation performance protects against newborn stems, leaves and roots, preventing pests from growing larvae. Another feature of SPIROTETRAMAT CAS 203313-25-1 is the long duration, can provide up to 8 weeks of effective control.SPIROTETRAMAT is efficient and broad-spectrum, can effectively control a variety of sucking mouthparts pests, such as aphids, thrips, wood lice, powder scale, whitefly and scale insects and so on. The main crops that can be used include cotton, soybeans, citrus, tropical fruit trees, nuts, grapes, hops, potatoes and vegetables. Studies have shown that they have good selectivity for important beneficial insects such as ladybugs, eating aphid and parasitic bees.


VOLSEN R&D specialists, quality manager and sales with abundance experience make sure products are reliable and service is professional. The producing person inspect every step of the whole process and check up the quality strictly, in order to insure every batch of raw material achieve the standard of EP,CP, JP,BP etc.Matching to the diversified requirements of companies VOLSEN is steadily marching to reach the peaks.


Volsen owns a professional custom synthesis department, with more than 15 senior scientific research chemical personnels who have a graduate degree or above. We also have an independent scientific management system. Our company integrates years of production experiences and talent reserves that forms a strong R&D production capacity, furthermore we could undertake various chemicals customizations from kg to ton relying on the existing production base and equipment.


Manufacturing Unit is equipped with a facility of progressive reeducation of emissions, effluents and discharge of waste material that are known to have a negative impact on the environment. Besides, Laboratory as well as plant is equipped with latest Machinery, Equipments, Technical personnel & Means of communications.

Due to supply of reliable quality, efficient follow up, scheduled delivery and prompt response to any matter, company wins good comments from customers.

We aimed at delivering real business value to our clients. For any interest, pls call on us or email us to get our best services.

Email to this supplier